Country branding: The UK Riots – How will Britain be remembered? 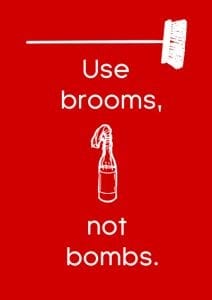 Use Brooms Not Bombs by Dan Thompson

Social media is being blamed for the rapid spread of the riots throughout London and the UK. Social media is a powerful tool but does have it’s pros and cons. The beauty of social media is that most messages are traceable and can help police to track down these thugs.

Saddest moments (so far) from the UK riots

There are hundreds of sad tales from these riots. For me, the saddest moment was seeing a poor injured man being tricked into thinking he was being helped, while thugs raided his rucksack.

Another tragic tale: Having been born in Croydon, the tale of the House of Reeves, a family owned furniture store which has stood up to two World Wars and a recession, was burned to the ground in just a few hours on Monday night. I feel sorry, yet proud of the Reeves family, who have been so brave.

As for the many independent businesses that have been destroyed – there will be weeks of lost trade which will cause unrepairable damage to their livelihoods and families.

All businesses should have contingency plans written into their business plans, but how many would include riots? Luckily, Nick Starling from the Association of British Insurers says insurance policies will cover most of the damage and the losses felt by businesses. The only problem is that as most of the businesses are being treated as crime scenes, it will take a time for the loss adjusters to do their work. This will be the time when insurance companies will have to practice what they preach. Will insurance companies deliver on their brand promise? Only time will tell!

Brands riding on the back of the Riots

We found an excellent blog in Marketing Week by Lara O’Reilly who is Marketing Week’s digital and telecoms specialist. Lara said: “Let’s place our bets on how long it will be before a home improvement store or garden centre donates some brooms or a supermarket offers their cleaning products to help with the efforts”.

Lara also noted that El Paso Foods had said on its Facebook page this week: “In these trying times I think we could all benefit from a bit of comfort food, and there are few things more tasty and reassuring than baked enchiladas, full of spicy chicken and topped with lots of bubbling cheese”. You can read more amusing stories by reading Lara’s blog.

Yes. We were watching the riot news updates last night and saw the terrible damage that rioters did to Miss Selfridge in Manchester. The Miss Selfridge logo appeared on our TV screens for hours, on a BBC channel. How much would Miss Selfridge normally have to pay for this kind of exposure? Luckily for this fashion store, they are part of the Arcadia Group which also owns Dorothy Perkins, Top Shop, Top Man and many more fashion retailers, so this damage could be a blessing in disguise for Miss Selfridge (in the grand scheme of things).

Also more good news … a local artist, Dan Thompson, has made national news by setting up a Twitter hashtag: #riotcleanup. Well done Dan for your quick thinking – ironic how something like this can give you more column inches than your art!

Finally, it’s British disaster aftermaths which showcase the generosity, solidarity and community spirit of the majority of the British public. Although the minority (thugs) have caused millions of pounds worth of damage – the way in which most of us pull together in times of hardship still makes me proud to be British.