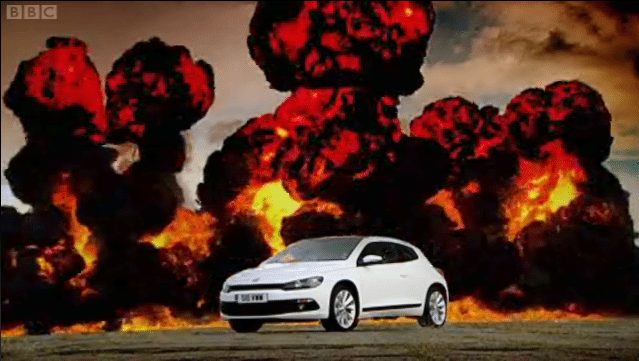 If you watched Top Gear last night – you will see that advertising is not as easy as it looks! It was hilarious – and it proves that you should leave the creative stuff to us experts!

For this week’s Top Gear challenge, Jeremy Clarkson and James May tried to create their own TV ad campaign for the diesel version of Volkswagen Scirocco. Like all creative campaigns, the agency must ‘sample’ the product for themselves so they can base their concept on theory. Unfortunately, Jeremy and James liked the car, but it was ruined by the fact it had a diesel engine and was sluggish. How do you spin something positive out of that? It’s tough at the top you know.

In this case the boys needed to focus on the Scirocco making diesel exciting! We all know Top Gear is not serious, and deep down we know that Jeremy and James were ‘avin’ a laugh when presenting their ad campaign concepts! Or were they?

Jeremy presented a clip of a Scirocco on a track with the background exploding! The voice over – “The new Volkswagen Scirocco diesel… It’s explosive. From explosions, to mother-in-law jokes, to blood and guts – this was another Top Gear challenge that had me in stitches. You can see the last night’s Top Gear show by clicking here

So the moral of the story is …. If you have a product to advertise, don’t leave the campaign to chance, call The Brand Surgery on 01903 824229 for a confidential chat. Whether it’s a new mobile phone, a new disposable nappy or a DIY plastic surgery kit – we can turn your campaign into success! From online banner adverts to adverts for magazines and newspapers, to posters at Victoria Station – we will advise and design you the best kind of advertising for your product or service.